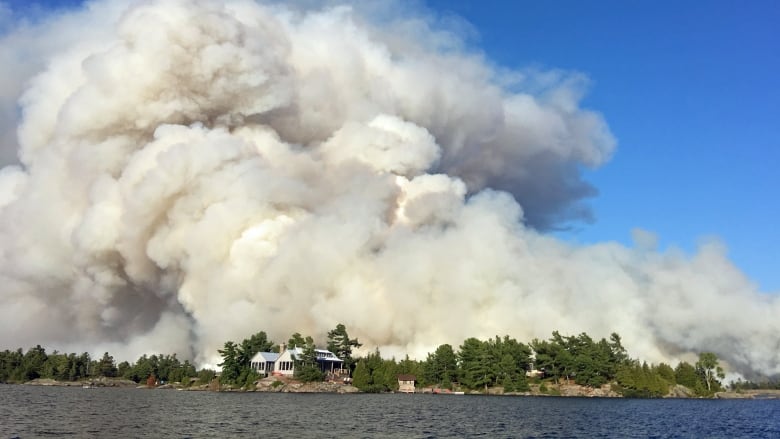 The Parry Sound 33 forest fire began at a massive wind farm construction site on the northeastern shore of Georgian Bay on July 18. The blaze burned out of control until late August. (Warren Wright)

The forest was tinder dry. With no rain in weeks, the parched grass in the undergrowth had turned to straw, prompting fire bans across northeastern Ontario.

Yet heavy construction in the bush pressed on last summer at the site of the province’s largest wind energy development.​

CBC News has learned there were at least three construction-related fires at the Henvey Inlet Wind (HIW) project in the weeks leading up to Parry Sound 33, the massive wildfire that torched thousands of hectares of wilderness along the northeastern shore of Georgian Bay — a destructive path that started at the construction site on July 18.

The three previous fires were reported to the province at the time. In one case, officials even had to dispatch water bombers to help bring the fire under control.

But a heavy truck operator who worked at HIW tells CBC News there were many more small fires during the same period prior to Parry Sound 33.

The wind farm was already months behind schedule, as crews cleared roads and prepared foundations for 87 turbines. Only a handful of the large windmill towers were up last July.

The project is a partnership between the Henvey Inlet First Nation and U.S.-based Pattern Energy Group LP. They need to have the entire wind farm operational by next spring or risk losing their contract to supply wind power to Ontario’s electricity grid.

Provincial officials have been interviewing workers, including Hollis, as part of their investigation into the cause of Parry Sound 33. Their findings are expected to be released by next summer.

Watch: The Burkes give a tour of what used to be their cottage.