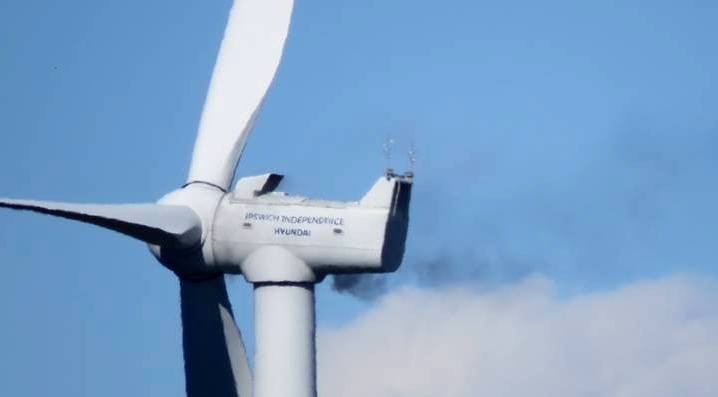 Turbine lasted only six years before electrical fire. Built by D&C Construction in 2012, with a supposed life of 20 years,

IPSWICH — A wind turbine by the transfer station burned for more than an hour before the fire department was called to intervene, and the closest hydrant was far out of reach once trucks finally rolled down Town Farm Road.

The fire was tied to electrical equipment in the base of a privately owned wind turbine behind the transfer station, he said. Another turbine on the opposite end of the site is owned by the town.

It took more than an hour for a maintenance crew to get to the scene from Wilmington, Theriault said.

“Once the gentleman from the maintenance company got there, he found there was smoke,” the chief said. “That’s when we got the call.”

As crews arrived, the closest hydrant was reported as 110 Town Farm Road, which is a ways down the road.

IPSWICH, MA— Firefighters have successfully put out a fire at one of the two wind turbines on Town Farm Road on Thursday.

The incident was reported at around 1:35 p.m. on October 18. The dispatcher radioed that the fire was called in by an employee.

No one was reported injured in the incident.

The dispatcher said the employee reported a “pretty good electrical fire — smoke is coming from the unit, and he has no fire extinguisher.”

The fire was confined to electrical equipment on the first floor, said Fire Chief Andy Theriault afterwards. “There was no extension,” he added.

Theriault said smoke filled up the tower and eventually vented from the top of the 260-foot structure.

However, eyewitnesses said that smoke was only intermittently visible.

An off-duty fire department shift was called back, while crews handled the blaze. Rowley Fire Department also covered Ipswich from their quarters.

The fire was reported to be knocked down just after 2 p.m.

via Electrical fire at wind turbine | thelocalne.ws  News for Ipswich, Rowley and other interesting communities.