In my last column I discussed an apparent paradox: why, if solar panels and wind turbines are so cheap, do they appear to be making electricity so expensive?<
One big reason seems to be their inherently unreliable nature, which requires expensive additions to the electrical grid in the form of natural gas plants, hydro-electric dams, batteries, or some other form of stand-by power.

Several readers kindly pointed out that I had failed to mention a huge cost of adding renewables: new transmission lines.

Transmission is much more expensive for solar and wind than other plants. This is true around the world —  for physical reasons.

Think of it this way. It would take 18 of California’s Ivanpah solar farms to produce the same amount of electricity that comes from our Diablo Canyon nuclear plant.

Moreover, these transmission lines are in most cases longer. That’s because our solar farms are far away in the desert, where it is sunny and land is cheap. By contrast, Diablo Canyon and San Onofre nuclear plants are on the coast right near where most Californians live. (The same is true for wind.)

New transmission lines can make electricity cheaper, but not when they are used only part of the time and duplicate rather than replace current equipment.

Other readers pointed to cases that appear to challenge the claim that increased solar and wind deployments increase electricity prices.

John Hanger, a former Secretary of Planning and Policy for the state of Pennsylvania, pointed to the states of South Dakota, North Dakota, Oklahoma, Kansas, Texas, and Iowa as “examples of high wind/solar (up to 30% or more) and average/below average prices.”

My colleagues Madison Czerwinski and Mark Nelson pulled the data and here is what they found:

What about Hawaii, California, and Nevada — states that, Hanger noted, “have 10% solar or more”?

Does that mean that deploying solar and wind at-scale always and everywhere increases electricity prices? No. In some cases, the high cost that unreliable solar and wind impose on the electrical grid are offset by much larger declines in the price of other fuels, namely natural gas.

However, it is neither remarkable that there are outlier states nor that they are Texas and Nevada.

Many factors beyond the relative reliability of a power plant determine electricity prices. We have been discussing the big ones, which include but are not limited to the addition of new solar and wind and the costs they impose due to their unreliability.

Texas, for example, is the epicenter of the fracking revolution. Between 2009 and 2017, natural gas prices for Texas power plants fell 21 percent and wholesale electricity prices fell 21 percent.

Texas energy experts point to the way the way Texas electricity market is structured, which has allowed some high-profile bankruptcies of natural gas generators, and a re-tightening of supply last year.

That tightening of supply contributed to a 27% increasein electricity prices in 2017 and, according to Bloomberg, prices in Texas are going to increase again. (“Think power’s expensive in Texas this year? Just Wait Until 2019.”)

Meanwhile, solar plants in Nevada are, like those in California, the most efficient in the nation, producing electricity at whopping 30 percent of its rated capacity. By contrast, solar in New Jersey has a “capacity factor” of just 12 percent.

Integrating solar on to the grid is much easier when to do when you can easily turn natural gas plants up and down to accommodate their intermittency. And it’s much easier to do when it is 12 percent of your electricity instead of 20 percent.

But even at low levels, problems arise. According to the research done by Lion Hirth, solar’s value drops by 50 percent when it gets to just 15 percent of mix. While those values may be different for Nevada, the impact of unreliability is the same.

What is most remarkable about U.S. states heavy in solar and wind is that electricity prices rose so much given the huge decline in natural gas prices.

Had natural gas prices not plummeted at what was almost the exact same time as the beginning of the large-scale build-out of solar and wind in the United States, price increases in solar and wind heavy states would have been far larger.

Around the world, from Germany and Denmark to Spain and  South Australia, even modest penetrations of solar and wind, compared to what advocates claim we will need to decarbonize, lead to large price increases.

Consider Spain. Its electricity prices were below the European average in 2009. Today they are among the highest in Europe. There is little debate in Spain that this was a result of adding so much solar and wind, which led the government to cut subsidies.

Some readers suggested that the contribution of solar and wind to high electricity prices was a legacy of older, more expensive projects, and implied that rising solar and wind penetrations would decline in the future.

This thinking requires ignoring both physics and economics. The value of solar and wind decline in economic value as they become larger shares of the electricity grid for physical reasons. They produce too much energy when societies don’t need it and not enough energy when they do.

This problem is temporarily fixed through short-term (but still expensive) work-arounds — like California and Germany paying their neighbors to take their excess electricity.

But the more solar and wind are added, the problem is worsened, not improved, which is why the economic value of solar and wind decline as they become a larger part of the grid.

Moreover, we can see that in places like Germany, which is now procuring solar and wind at their supposed rock-bottom prices, is still paying massively more for electricity. 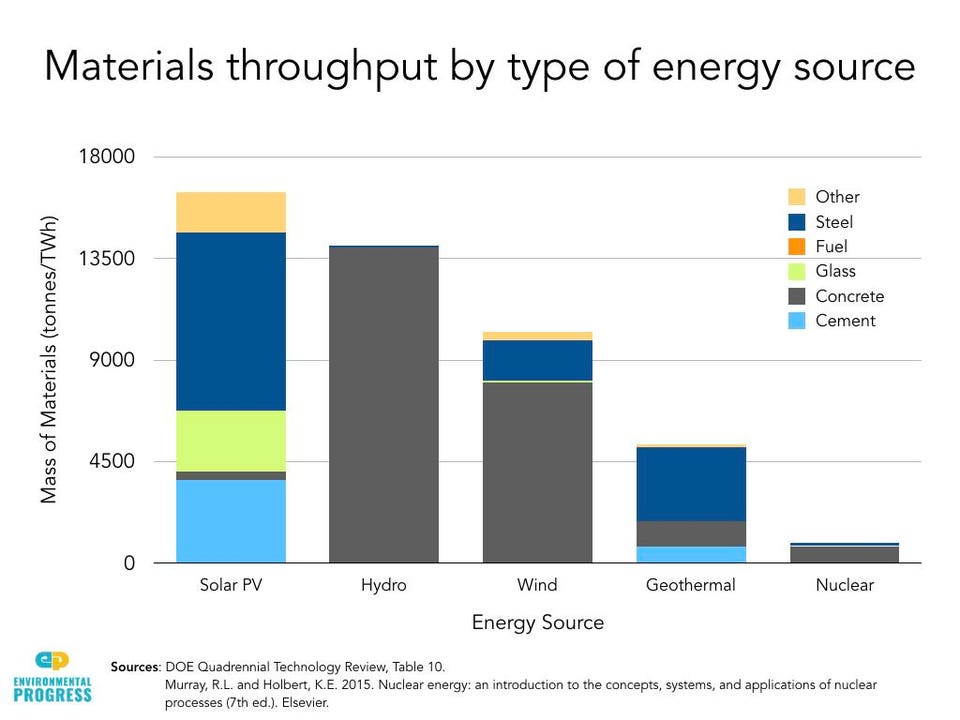 This reality could, along with new transmission, be a significant additional driver of higher costs, now and in the future.

The cost of land and expensive new transmission lines can be eliminated if you have solar on your roof, note solar developers, but the savings on transmission are more than cancelled out by higher installation costs.

What all of these additional costs have in common is that they stem directly from underlying physical limits with generating electricity from sunlight and wind. Both “fuels” are dilute and unreliable.

To make up for those inherent weaknesses, expanding energy from solar panels and wind turbines requires massively increasing the physical footprint of energy production.

All renewables thus require a material throughput — from mining to processing to installing to disposing of the materials later as waste — that is  orders of magnitude larger than for non-renewable energy sources.

As such, while there is and will remain complexity and uncertainty about the specific causes of why solar and wind make electricity expensive, most if not all stem from their underlying physical and (thus environmental constraint), which is the limited, diffuse, dilute, and unreliable nature of renewable fuels.

And that’s something we need to talk about — and deal with — if we are to protect the natural environment while expanding prosperity to all.

I am a Time Magazine “Hero of the Environment,” Green Book Award Winner, and President of Environmental Progress, a research and policy organization. My writings have appeared in The New York Times, Washington Post and Wall Street Journal, Scientific American, Nature Energy,…